To use the script, download Export-Layers-as-PNG.jsx and put in your Illustrator scripts folder (usually in Applications/Adobe Illustrator/Presets/Scripts/). Restart Illustrator, and run the script by going to “File > Scripts > Export Layers as PNG”.

You can try it out on the sample file layer-test.ai. 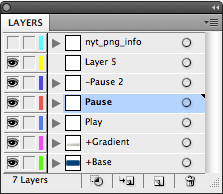 When you run this script on this file, it will export 2 PNGs: Play.png and Pause.png. The “+Button” and “+Gradient” layers will appear in the background of both exported files, and it will skip the “-Pause 2” and “Layer 5” layers.